"Annelise Heinz's Mahjong is a beautifully written, deeply researched history of mahjong. She examines the transnational history of this game and how it has moved across national, racial, cultural, and gendered boundaries while at the same reformulating and reinforcing some of these same borders. This is a history that combines the study of leisure with labor, consumption with performance, as well as race and ethnicity with class and gender. It offers fresh interpretations of modern America by focusing on the unlikely journey of a game." -- Judy Tzu-Chun Wu, author of Radicals on the Road
​
​"What could have been presented as fun and therefore trivial, the game of mahjong, in the capable hands of Annelise Heinz, instead emerges as a serious matter in cross-cultural history, linking China and the United States. This book makes women's history, American Jewish history, and the history of class and leisure subjects that inform each other. Through deep research and clear writing, Heinz drives home the point that it is not just a game." -- Hasia Diner, New York University
​
"In a work of dazzling richness and scope, Annelise Heinz reveals how multiracial makers, players, and marketers of mahjong negotiated and shaped social change in everyday life for a century. Comparing the rounds played by Chinese men detained at Angel Island with the tournaments held by Japanese Americans in World War II incarceration camps underscores the meanings of recreation in confinement. Evoking the delights of the game, this fascinating study also shows how Jewish women adapted mahjong, cultivating ties of female friendship and ethnic community, while also claiming Americanness and modernity." -- Valerie Matsumoto, University of California, Los Angeles

"In this lively history, Annelise Heinz shows us that mahjong is more than a game. In her deft hands, it illuminates modern consumerism, Orientalist fantasy, ethnic identity, and women's self-fashioning across the twentieth century. A richly researched, happily readable book." -- Joanne Meyerowitz, author of How Sex Changed
​ 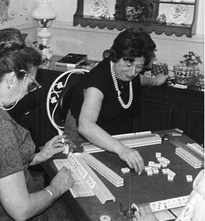 Abstract: At the height of the mid-twentieth-century domestic revival, middle-class Jewish women created forms of “leisured domesticity,” marked by temporary female-only recreational spaces in their family-centered arenas. In contrast to other forms of recreation, with mahjong second-generation Jewish women gained an entitlement to peer-oriented leisure in the site of domestic labor: the home. Based on extensive oral histories, Heinz argues that consistent cultural patterns emerged around mahjong. These commonalities created a widespread culture that reached its height in the postwar years of upward mobility, experienced in particularly pronounced ways by Jewish Americans. Although the culture of mahjong could reinforce women’s domestic roles as much as undermine them, the weekly mahjong ritual demanded a temporary reallocation of household labor. Understandings of postwar life have largely been shaped by a duality between what defined an idealized domesticity in theory (devoted mothers in family-centered middle-class homes) and the ways that women resisted or were excluded from these norms. In contrast, the practices of leisured domesticity illuminate a multidimensional reality. Mahjong-playing mothers neither overthrew nor fully acquiesced to the powerful norms of postwar American “model” domesticity. Creating a widely accepted rhythm of women’s recreation made domesticity more livable by carving out patterns of leisure within it.

To the Best of Our Knowledge (PRX and Wisconsin Public Radio):
​"Picking Up The Pieces Of Mahjong" 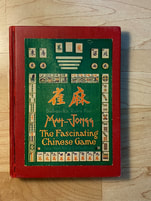 The public radio show "To the Best of Our Knowledge" dedicated an hour-long episode to the social meaning of games. For the first 20 minutes, producer Angelo Bautista discusses mahjong's history in the United States and I speak about my research. On the website you'll also find a timeline they created for mahjong's history in the U.S., including a brief clip wherein I discuss mahjong in Japanese American incarceration camps during WWII.

University of Oregon Humanities Center​:
​Mahjong and the Making of Modern American Culture

Frontiers, A Journal of Women Studies:
​Performing Mahjong in the 1920s: White Women, Chinese Americans, and the Fear of Cultural Seduction

The Humanities at Stanford division of the Stanford News Service wrote an article about my project.  It encapsulates some of my main arguments and adventures in field research.

The Better Part:
​The History of Mah Jong in the United States

A great news piece in the New York Israeli sister publication of The Daily Forward.  The reporter interviewed a number of sources regarding the history of Jewish American women and mahjong, including yours truly.
Powered by